Guanajuato is a state of Mexico, known by all as the cradle of independence, so be prepared to walk while discovering incredible stories, know the old mines and eat delicious in the restaurants of the place. If you have any questions, check this list of places you should visit when choosing between flights to Guanajuato.

Visit the Iconographic Museum of Quijote

Whether or not you are a fan of Don Quixote’s novel, you must visit this place that houses the largest Don Quixote collection in the world. In this museum, you will be able to observe stained glass, paintings and sculptures of one of the most recognized novels worldwide, and when you leave, you can also buy souvenirs such as books, stories and decorative figures.

Discover the history of the famous alley of the kiss

It is a narrow alley in Guanajuato visited by many couples in love inspired by their tragic history. It’s about two young lovers who lived so close that their houses were almost connected by the terrace, so that’s where they had their meetings to talk, one night her father found them kissing and he threatened to kill her if he returned to see him kissing him. She was the only child she didn´t believe him, so the next night he found them kissing again, the father without saying anything took out a knife and buried it in his chest until he killed her, after that his boyfriend committed suicide in the mine where he worked. 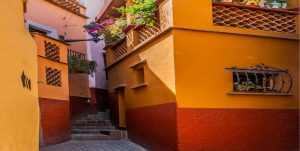 Visit the Mines of Guanajuato

Guanajuato was a mining city; during the colony, it had several important mines that today are tourist attractions. Some of the most well-known mines are the El Nopal Mine, the Experimental Mine and the Rayas Mine, which is the most impressive due to its almost 500 meters depth.

Stroll in the Garden of the Singer

It is a very quiet and ideal place to walk outdoors and exercise, his name is due to José Carpio, a musician who encouraged with his music in this place to the inhabitants at the time of the colony. The park has fountains and in the center a kiosk, in the garden they sell one of the most delicious Guacamayas of the place, the typical dish of the city that is prepared with a bread stuffed with chicharrón in sauce, lemon and salt.

Walk through the Alley of the Countess

Undoubtedly, the most captivating of Guanajuato are its legends, and the story of this alley speaks of a Count who met many years ago a very beautiful woman. It is said that soon after getting married the Count began to mistreat her and to speak badly of her, the ashamed woman locked herself in her enormous mansion and only from time to time she was seen leaving by the small back door that faces this alley.

Guanajuato is a place full of colors and magic, there are many places that offers this incredible destination for you to spend a pleasant vacation, we hope you enjoy a lot when you choose between flights to Guanajuato and end up like many, in love with the city and traveling every one of its corners.